This past summer, my library hosted a Babymouse and Squish party, based on the graphic novels by Jennifer and Matthew Holm. It was incredibly fun to put together and a great way to not only highlight these two fabulous series, but to introduce young readers to other easy-to-read graphic novel options such as Toon Books and Lunch Lady. This program is great for any age that is reading from age 5 to 12.

To come up with ideas, I read through every book in each series. The Holms grew up in a science household (their dad was a scientist and left petri dishes of cultures in their household fridge) and are both creative and artistic, and very funny to boot. They clearly read and watch film a lot — the books have so many “classic” and “cult classic” pop culture references. I had a blast spotting these elements in the storylines. 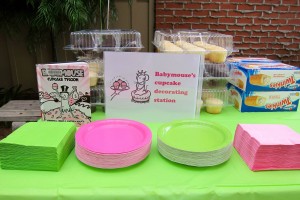 I decided to go with a pink and green color palette. We coordinated tablecloths, plates, napkins, utensils, balloons, and even cupcake sprinkles!

In days leading up to the party, I had a Babymouse and Squish book display at the front of the children’s room and had made posters and flyers advertising the event. I stuck quartersheet flyers in copies of the books. Stacks were also at the self checks and front desk.

1. Squish’s Slime Station – We used the cornstarch, water, and food coloring recipe found in one of the Squish books. It was simple and satisfying for the kids–who lingered at the station. The texture is particularly interesting. You could also go with a Borax and white glue slime recipe if you wanted something more bouncy.

2. Babymouse’s Cupcake Decorating Station – We offered 3 options, actually: vanilla cupcakes, chocolate cupcakes, and Twinkies. (Squish is obsessed with Twinkies.) Kids frosted their cupcake or Twinkie and decorated with sprinkles. This station tied in especially nicely with Babymouse: Cupcake Tycoon. The frosted Twinkies were a total experiment! 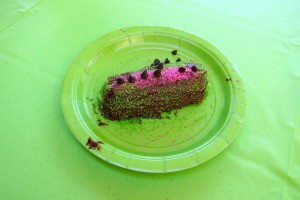 3. Squish’s Comic Book Box: We provided a box of free comics. Squish is comics obsessed so this was a nice literacy and series tie-in. Older kids especially appreciated this station. 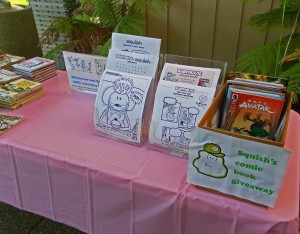 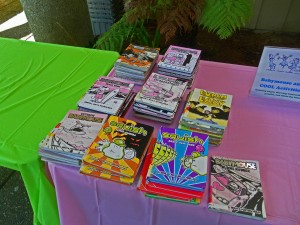 Kids ranging from age 5 to 12 attended the party. We held it outside on our patio in a sunny day, so we had kids participating in activities while parents helped them and/or chatted with other parents. The atmosphere was very positive. It attracted both English and Spanish speakers/readers, since the Babymouse books are also available in Spanish.

More Ideas
When I do this party again, I’d like to incorporate other ideas including:

-Shield/Coat of Arms lesson/decoration station to go with Babymouse: Dragonslayer.

-A stomp rocket game station to go along with the Babymouse in outer space book.

-Karoke to go with Babymouse: Rockstar.

-Squish’s Mystery Box station, based on the activity described in the series.

This was an extremely fun program that encourages beginning readers and highlights how comics are a great form featuring style and substance!