Do  you get tired of disciplining the same patrons for the same offenses?   Have you ever considered implementing a character development framework to encourage patrons and staff to take responsibility for an overall change in the environment?   Five years ago, that’s just what the Kendallville Public Library did.  In conjunction with our local school system, we became a CHARACTER COUNTS library, committed to promoting ethical living and making a cultural change.   Simply put, we adopted a framework  that encourages kids to make better choices that will make everyone’s lives better.

CHARACTER COUNTS is not a new initiative, but rather has been embraced by schools, libraries, churches, communities around the world and is a requirement for all olympic athletes.   It is not a program, a curriculum, or an add on to anything you are currently doing, but is about developing a common language of core ethical values.   These values surpass religious, political and socioeconomic differences.

Launched by the Josephson Institute of Ethics, in 1993, CHARACTER COUNTS introduced the Six Pillars of Character – trustworthiness, respect, responsibility, fairness,
caring, and citizenship. 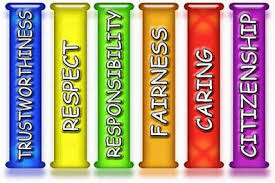 Once these pillars are introduced to your staff and patrons, agreements can be signed, language can be added to policies, applications, and infused into your daily programming and each and every function.

The key to success, is to make it visual and make it verbal.   Post the words and use them.  Rely on them when communicating with others in positive and constructive conversations and situations.   Over time, you will see a difference, and staff will feel better equipped to vocalize deficiencies in behavior, using the framework as a guide.

Are we now a perfect library, with zero disciplinary problems?   No, far from it!  However, we have set a common set of rules, that match up with what patrons are hearing at school, the YMCA, church, and other places in the community (and we hope at home) that allows us to be more consistent in handling each and every situation that arises.

How likely are you to investigate CHARACTER COUNTS or another character development program as a library?