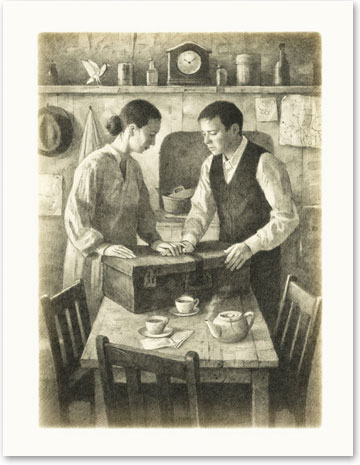 Thousands of unaccompanied refugee children fleeing violence in their home countries of El Salvador, Guatemala and Honduras have crossed the United States border and turned themselves in where they are being held in detention centers and placed in removal proceedings. In June 2014, at the ALA Annual Conference in Las Vegas, REFORMA (National Association to Promote Library & Information Services to Latinos & the Spanish Speaking) decided to form the Children in Crisis Task Force to get books into the hands of these children while their future is determined. The Children in Crisis Task Force Co-Chairs are looking for ways  to partner with immigrant youth centers. Co-Chair Patrick Sullivan states, “Vendors are waiting in the wings ready to donate books.” Through monetary donations REFORMA is ready to purchase books, backpacks and school supplies.

In September 2014, National REFORMA President Silvia Cisneros personally delivered the first shipment of donated books to McAllen, Texas. In October 2014, Theresa Garza Ybarra, President of REFORMA’s Estrella de Tejas Chapter coordinated a second shipment of donated books to Karnes City, Texas. REFORMA is currently working on a third shipment to Artesia, New Mexico with REFORMA de Nuevo Mexico Chapter President Flo Trujillo. Task Force Co-Chair Oralia Garza de Cortes says it is a slow challenging process that is important. She states, “(REFORMA) is the first group to put books into the detention facilities. No one has done that before.”

Sullivan says that the next phase of this project is to determine what REFORMA can do to help local chapters help newly arrived children in their region who have been re-united with their families but are still under order of removal. Some REFORMA chapters are already doing this such as Los Angeles and San Diego Libros. For example, Ady Huertas, Teen Center Manager for San Diego Public Library’s Central Library, is working closely with local community organization Southwest Key. They have a couple of centers that provide temporary housing and education for youth in transition. They arranged one class visit consisting of 2 centers and 3 classes with 20 youth aged 8-17 years old. Huertas gave them a tour, library cards, and introduced them to library resources. She also gave the youth free Spanish books and some incentives. She is now coordinating a second visit and hopes to schedule regular monthly visits. To her surprise, Huertas even received thank you notes in English! Huertas explains that libraries have a role in servicing this segment of the community. Huertas states, “We’re trying to introduce the library as a safe place and in cities anywhere where they end up, they should look for the local library and get resources and technology for free.”

Libraries have traditionally reached out to immigrant populations to help them navigate their way in a new country. Garza de Cortes notes that this population is different in that they have refugee protected status. When asked about the next steps, Garza de Cortes responded, “(We need to) create more awareness of our role and responsibility as librarians to provide accurate information for the families and work with agencies to be able to help them better understand the power of libraries and power of books to help children change their lives.”

To find out more information about this project or make a book or monetary donation, please visit the Children in Crisis site here.

Ana-Elba Pavon is the Branch Manager of Oakland Public Library’s Elmhurst Branch in Oakland, CA and is writing this post for the Public Awareness Committee. You can reach her at apavon0405@gmail.com