Is she a girl or a cat? This question about iconic Japanese character Hello Kitty was hot on the Internet not long ago, but the thousands of fans of all ages who attended the sold-out first-ever Hello Kitty Convention in Los Angeles over Halloween weekend were unconcerned with the answer. Instead, they were indulging in an overload of “kawaii,” the Japanese word for “cute”, as Hello Kitty mania took over Los Angeles.

If you’ve never attended a fan convention (or “con,” as they are known among insiders), it’s a must-do for anyone interested in popular culture and the many characters who live in our imagination. Children in particular are drawn to familiar characters, as any children’s librarian can attest. Sanrio’s Hello Kitty is especially popular among patrons young and old alike at my library, and I was thrilled to have the opportunity to get up close and personal with her at the convention.

As a blogger, I snagged an invitation to a super-exclusive press preview and elegant VIP party the night before the “con” opened officially to the public. This was a special delight for me as not only was I able to see the exhibits without the sold-out crowds of the convention, but we even got swag bags filled with exclusive Hello Kitty goodies (these included an actual apple with a Hello Kitty logo in an elegant box with a gold ribbon–an inside joke for Hello Kitty fans, since Hello Kitty is described as five apples tall and weighing as much as three apples).

As you might guess, a retrospective of Hello Kitty merchandise from her 40-year career was on display, including the original Hello Kitty coin purse, the first item manufactured, which was on display for the first time in the U.S. Normally kept in a vault in Japan, the tiny purse was exhibited in a special darkened room where it was shown as proudly as the crown jewels! A huge reproduction was also on display for photo ops.

There were many special opportunities for fans, including free Hello Kitty tattoos designed especially for the con–the real kind for adults, although the stick-ons for kids were also available. The tattoos were in such demand that fans had to line up at 5 a.m. to get a spot. 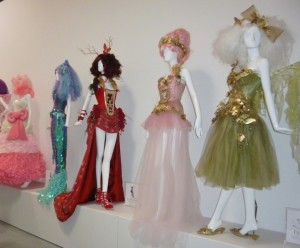 Other highlights included an incredible high fashion installation curated by Stephiee Nguyen of JapanLA clothing, with one-of-a-kind creations by 13 designers from all over the world, special workshops with designers such as Paul Frank where fans could learn Hello Kitty-themed jewelry making, nail art, scrapbooking, and other crafts, and of course lots of exclusive shopping with merchandise available only at the convention. Fans waited in line over five hours for a chance to spend money at the special Sanrio pop-up store, although a Super Supermarket with other exclusives from Sanrio licensees offered slightly shorter lines (Hello Kitty SPAM, anyone? Or how about Hello Kitty headphones from Dr. Dre?) 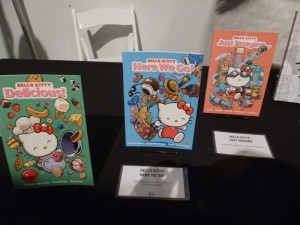 Librarians and booklovers were not ignored, since the Super Supermarket included representatives from Viz Media’s  Perfect Square imprint. Viz is one of several publishers who produce high quality Hello Kitty books suitable for the library market. Currently five volumes are available in their Hello Kitty graphic novel series; this suitably adorable series is wordless, and thus suitable for pre-readers as well as older children who can use these graphic novels to develop their own narrative skills by imagining the stories through the images. Perfect Square was also promoting a new release, Hello Kitty, Hello 40: a Celebration in 40 Stories, in which a variety of authors and illustrators pay tribute through stories and art.

As at other conventions, fans could attend an array of panels with Hello Kitty experts, including one with Hello Kitty head designer Yuko Yamaguchi. Although Hello Kitty was created “to inspire happiness, friendship, and sharing across the world,” she was initially a minor–i.e. not very profitable–character at Sanrio. It was not until Ms. Yamaguchi took over her design in 1980 that she increased in popularity until she became the #1 character in Japan. Ms. Yamaguchi’s aspirations for Hello Kitty do not stop there, as she would like to see her become the #1 character world-wide. As to whether she’s a cat or a girl, Ms. Yamaguchi replied that she didn’t understand what all the fuss is about. “She’s not a cat and she’s not a human,” she responded. “What’s Mickey Mouse? I don’t think he’s a mouse…Hello Kitty is Hello Kitty and it’s my wish to continue to nurture her as a very special brand.” (you can read more of Hello Kitty’s back story here ).

It is clear from the enormous response to Hello Kitty con that, whatever she is, this deceptively simple and widely marketed character has a very special place in the hearts of both children and adults. I don’t doubt that Hello Kitty will be around for many years to come.

Our guest blogger today is Margo Tanenbaum. Margo is a children’s librarian in the Los Angeles area.  She blogs about children’s books at The Fourth Musketeer and is co-curator of Kidlit Celebrates Women’s History Month, a group blog with posts published in March.