Mine is one of the myriad libraries celebrating science this summer through our “Fizz, Boom, Read” summer reading program. Much to the delight of my STEAM-loving heart, all branches across my library system have hosted a ton of science programs this summer for every age. Some were led by outside groups like the St. Louis Science Center (always tap your local STEM resources!), and others have been led by in-house staff. They’ve all been a huge hit with kids and their families. One of my most successful in-house preschool programs this summer was a recent program titled “Excellent Explosions.” Here’s what we did. 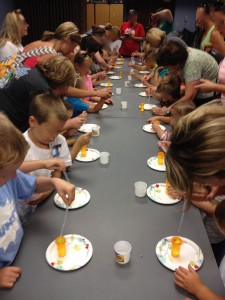 While I did have plenty of materials on hand for attendees to check out, this wasn’t a storytime program, per se. That is, I didn’t share a book at the beginning of the program as I usually do in my Preschool Science programs. Instead, I started the event by talking with the group about physical vs. chemical reactions, and how when chemicals react, interesting things happen–like explosions.

After talking about reactions and answering any kiddo questions, we proceeded to the main event: four very exciting chemical reactions.

I had three 1-litre bottles of Diet Coke and two sleeves of Mentos on hand for this reaction demonstration, which we did out on the library’s patio (warning: very messy). Before dropping any Mentos into the first bottle, I had the kids hypothesize what would happen. Hypotheses ranged from “Nothing will happen” to “It’s gonna EXPLODE!” From there, I dropped about three Mentos into the first bottle, with a decent-sized fizz geyser as the result.

Having seen what happens when three Mentos were added to a bottle, we made hypotheses regarding what would happen when we dropped in seven Mentos. That demonstration resulted in a slightly quicker, noticeably higher geyser reaction.

Then, with a pause for dramatic effect, I announced we would put a whole sleeve of Mentos in the last bottle. There may have been a few delighted shrieks of anticipation from the crowd. Friends, that last set of conditions resulted in a very quick, quite large geyser–one that was so quick and forceful, it pushed about five of the Mentos out of the bottle before they even had a chance to react with the Diet Coke. These three reactions gave us plenty of fodder to talk about how the amounts of ingredients that interact affect the reaction.

We stepped back into the program room for the rest of our program, which consisted next of a hands-on experiment. I had set out three long tables with paper plates, recycled prescription containers of baking soda, pipettes, and some vinegar for every child. I gave a brief introduction of the materials we were using (including introducing the word “pipette”), then encouraged the children to use their pipettes to drip some vinegar on the baking soda to see what type of reaction resulted. I moved about the room, asking questions about whether the amount of vinegar used has an impact on the fizzing reaction. A few kids dumped their baking soda on their paper plates and experimented there, while others dripped vinegar directly into the prescription bottles. I encouraged caregivers to ask their children to describe the reactions for them. 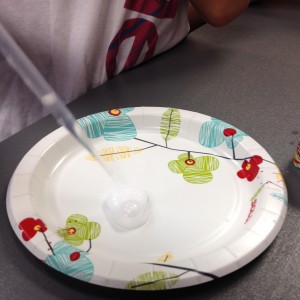 After all of the baking soda had exhausted its fizz, I had the children move to another set of three long tables. Each of these stations had a paper plate, pipette, and cup of water, with two children sharing a packet of two Alka-Seltzer tablets between them. I talked about what Alka-Seltzer is and what it is used for, and I posed some questions about why bubbles might help when you have a stomach ache. After our discussion, I had the kids put their tablet of Alka-Seltzer on their plate and use the pipettes to drop water on the tablet. Once again, I encouraged experimentation with the amount of water. Because the tablet will completely dissolve, we had the opportunity to discuss what that word means, too.

Our last reaction took the form, once again, of a demonstration. I introduced our demonstration by announcing we’d be making Elephant’s Toothpaste, and the kids and I came up with a silly story about a zookeeper who needed to brush his elephant’s teeth.

After we had completed our story, I discussed with the kids the ingredients we would be using in this reaction: hydrogen peroxide, yeast, dish soap, and food coloring. I also named all of our tools: the now-empty Diet Coke bottles from our first reaction; a funnel; a measuring cup; and a tub to contain any mess.

I used Steve Spangler’s basic recipe for Elephant Toothpaste, but in the interest of experimentation, the kids and I used different amounts of activated yeast in each of our three iterations of the experiment. Even though the resultant eruptions were not very different in size, the fact that kids got to see the reaction happen three different times was a huge delight to them. The looks of amazement, surprise, and excitement on their faces were outstanding.

That’s the note on which I ended our Excellent Explosions program, and what better note to end on? It is my goal in Preschool Science programs not only to introduce basic science concepts, like chemical reactions, but to instill a love of science in children as well. If their joyful faces and telling the checkout desk staff about the explosions were any indication, this program was particularly successful.