It’s the story of a 17-year-old boy who used plans for a Robohand from www.thingiverse.com and the 3-D printer at his local library to make a prosthetic hand for Matthew Shields, a nine-year-old family friend who was born without fingers on his right hand.  Awesome and heartwarming, and way beyond what most librarians think of when they introduce this technology. 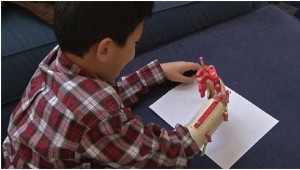 (The original story, picked up by People, was covered by KCTV in Kansas City http://www.kctv5.com/story/24717704/teen-uses-3-d-printer-to-make-hand-for-boy. This photograph of Matthew Shields using his hand is reprinted with permission from KCTV.)

I loved the article, and it got me thinking…with or without a prosthetic hand, would someone like Matthew be able to use the library’s 3-D printer?  What if he were blind, or if he had ADHD or autism instead of a physical disability?  I would guess that few librarians who are now providing 3-D printers or offering MakerSpaces are asking those questions and making sure that the answers are “yes”.

Right now, MakerSpaces are all the rage in the library world. They are a wonderful way to introduce new technologies and to provide a new outlet for creativity, learning and community engagement.  But they are not for everyone, even in the libraries where they exist, though they can serve more community residents if accessibility becomes one of the considerations when designing MakerSpaces and Maker programs or when introducing new technologies like 3-D printing.

A couple of libraries are taking the lead in bringing Making to people with disabilities in their communities. One is the public library in Washington, DC. For example, in 2013 four students supervised by assistant professor Mega M. Subramaniam from the University of Maryland, collaborated with a team from FutureMakers (www.kidsmakethingsbetter.com) on a MakerSpace event for individuals with cognitive disabilities and visual impairments at a branch of the library. They introduced a number of accessible MakerSpace projects, including building and testing flying machines made from craft materials and designing tracks for a marble run. The students who worked on this project were so enthusiastic about it that they’ve written and are trying to publish a guide for librarians who want to design similar accessible MakerSpace projects.

Another library that has entered the arena is Brooklyn Public. They have offered robotics, CAD (computer aided design) graphic novels and Legos MakerSpace programs for tweens and teens and made sure that kids with disabilities could participate. 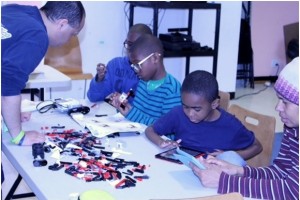 When librarians think about accessibility, what usually comes to mind is a person using a wheelchair who may need wide aisles between book stacks and a ramp to reach the library door. But that is a limited view. Several years ago, I participated in a disability awareness workshop called “It Takes More Than a Ramp”, and this has never been truer than in this age of MakerSpaces and advanced technology.  It does take more than a ramp to serve those in our communities with learning differences or physical challenges.  It takes a little thought and a little conversation with them or their caregivers, and a little ingenuity to see how things can be tweaked to make them work for everyone.  But, the extra time and effort is worth it. After all, just think about what the Matthew Shieldses of the world will be able to accomplish with the help, not only of a talented neighbor, but also of a friendly and accessibility-conscious librarian.

Barbara Klipper is a youth services librarian, consultant and advocate for library services for children and teens with disabilities. She is also a former chair of the ALSC Library Service for Special Population Children and Their Caregivers committee. ALA Editions published her 2014 book, Programming for Children and Teens With Autism Spectrum Disorder.

Look for a version of this post, including additional resources for programming in the Fall 2014 issue of Children and Libraries.