Tomorrow marks the return of my favorite program we offer at the library: R.W.D., or Read, Watch, Discuss! I’ve written about my book-to-film club previously, but tomorrow kicks off our special summer session. First up: Neil Gaiman’s Coraline! 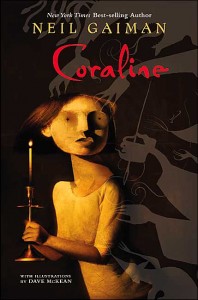 Oh, how I adore this book. I was always a fan of plucky heroines (and heroes!) and books that made me afraid to fall asleep. Coraline is all of those things and more. I read it as an adult first, but I know I would have loved it as a child, fan as I was of Betty Ren Wright and The House With a Clock in Its Walls. Coraline tells a remarkably creepy story – remarkable because it feels like something that really could happen, especially if one lives in a creeky old house with eccentric neighbors and parents who love you but don’t really have any time for you. The writing is wonderfully evocative, the tension nearly unbearable, and our heroine is fond of thoughts like, “Coraline wondered why so few of the adults she met ever made sense. She sometimes wondered who they thought they were talking to.” What’s not to love?

The film has two key differences from the book. First, there is the inclusion of a friend, Wyborn, whose grandmother’s sister was also taken by the Other Mother. Giving Coraline someone to talk to was a smart choice, as most of the book involves her inner monologue. I just wish Coraline was still allowed her solo, triumphant final defeat of the other Mother by the well, without the help of the added boy character.

The second major change is Coraline herself. Film Coraline, as voiced by Dakota Fanning, can be more than a little obnoxious, a choice by the filmmakers that I both respect (not too many borderline-unlikeable protagonists in a movie for kids) and dislike (borderline-unlikeable!) simultaneously. The personality change is jarring, especially since her literary counterpart is a slightly strange, mostly polite and good child.

What the film gets deliciously, marvelously correct is the eerie sense of dread that pervades Coraline’s world. Even when Coraline first visits the Other Mother, you can tell (to quote another famous literary mother figure) “Something is not right!”

And of course, there’s the animation itself. The Other Mother’s hand, skittering across the screen, is literally the stuff nightmares are made of. When Coraline first arrives, the seemingly perfect world is warm and colorful, with just the right touch of menace added by crooked shapes and gaping mouths. The character design is wonderfully evocative. Coraline is all spindly limbs and blue hair. Mr. Bobinsky’s anatomically impossible elongated arms and giant potbelly are the picture of someone gone to seed. The Other Mother goes from perfectly normal to hellish and creepy. When the world begins to disintegrate, the creators literally peel away the sets in front of our eyes. It’s marvelous stuff.

The beauty of the film is what wins me over to Coraline despite changes from the source material. We’ll see what the kids at my library think this afternoon!