Many children are familiar with how American women went to work in factories during World War II. PURE GRIT: HOW AMERICAN WORLD WAR II NURSES SURVIVED BATTLE AND PRISON CAMP IN THE PACIFIC gives librarians a resource to show the greater diversity of women’s war contributions.

With more than one hundred historical photographs, the book can be used to demonstrate the value of using the raw materials of history to understand a subject, and to help students appreciate the real people who made history happen. PURE GRIT is told through the viewpoints of different nurses, and can be recommended to help students analyze multiple points of view, as well as the use of primary source documents.

The research for PURE GRIT included a daunting amount of material. I wanted to tell a concise, powerful story about the 76 Army and Navy nurses captured by the Japanese, but also help readers come to know individual women.

Nine hours after Pearl Harbor, the Japanese bombed American bases in the Philippines. Like in Hawaii, they caught U.S. forces by surprise. Nurses there had not been trained in combat medicine. But they stepped up and preformed like troopers through four months of bitter battle and three years as prisoners of war.

Initially, I focused on two particular women because I discovered photographs taken of them in Santo Tomas Prison Camp.

This photo of Navy Nurse Peggy Nash was snapped by a Japanese guard in the prison camp hospital. Peggy had been in a panic when the man followed her around for five days because she didn’t know what he intended. She was relieved when he took her photo and finally went away. She never expected to see the picture.

But nearly there years later, it was found on a Japanese prisoner and wound up crossing the desk of a naval officer who had known Peggy. American newspapers published the photo and it was her family’s first indication she and the other Navy nurses might be alive.

This photo is Army Nurse Frankie Lewey tending a wounded man shortly after U.S. soldiers crashed their tanks through the gates to liberate the POW nurses. It’s iconic. Throughout combat and imprisonment, the women continually put the needs of others before their own. One of the nurses was so ill she was hospitalized when liberators arrived. But when she heard the voices of the American soldiers, she jumped up and went outside. She ended up nursing wounded men all night in her pajamas.

In the early 1980’s the Department of Defense conducted oral interviews with a few dozen nurses still alive.  Transcripts of these interviews became the heart of how I viewed the women’s experiences of combat and prison camp. These interviews also helped me distinguish the women’s attitudes and personalities.

I hope that PURE GRIT will be a valued resource for librarians wanting to show children the resilience and courage of American women and their broad and varied historical contributions. 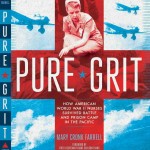 Our guest blogger today is Mary Cronk Farrell. Mary is an author of both children’s and YA books which feature little-known stories of history based on thorough research Learn more about Mary at http://www.marycronkfarrell.net/.  Pure Grit is her most recent title.