My #alamw14 experience got off to a great start with the USBBY Reception.  USBBY is the United States Board on Books for Young People, the national section of the International Board on Books for Young People (IBBY).  This reception is co-sponsored by ALSC, YALSA, and AASL, so it’s a great chance to mix with colleagues across divisions.  Best of all, the reception has not only a featured speaker discussing their work with an international focus but the announcement of the 2014 USBBY Outstanding International Books.  The USBBY Outstanding International  Book list recognizes the best titles for children originally published in another country.  They have age divisions for titles from PreK-12th grade.  The list is a truly amazing resource of international titles.  We were lucky to see this year’s lists first and to hear a wonderful speaker. This year, the featured speaker was Maryann Macdonald, author of the book Odette’s Secrets.  (pictured here)

Some of the titles featured may be familiar to US librarians and readers, but others were titles I had never heard of before but sounded intriguing and engaging.  They also sounded like an amazing way to broaden the diversity of your collection!

For instance, I had never heard of The Bathing Costume: Or the Worst Vacation of My Life written by Charlotte Moundlic and illustrated by Olivier Tallec but this French book about a Parisian eight year old on vacation with his meaner older cousins and brother sound absolutely delightful.  I also can’t wait to read Azzi in Between  by Sarah Garland, a graphic novel originally published in the UK about a refugee child seeking safe haven with her family.  These are just two of the titles announced tonight. The entire list can be found in this Powerpoint presentation – which is being shared with the public for the first time tonight – and will be published in the February SLJ and shared on USBBY site soon. 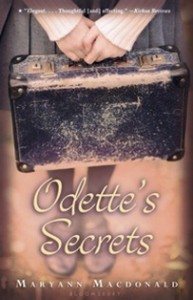 The other highlight of the reception was hearing Maryann Macdonald speak.  She told of how she discovered the true story of Odette Meyers, a Jewish child hidden in the French countryside during WWII, and turned it into a novel in verse.  Macdonald spoke about the day she stumbled across a plaque commemorating the Jewish children deported during WWII and became fascinated with their story, eventually discovering Meyers’s memoir in the American Library in Paris.  With Meyers’s son’s permission, she began researching Odette’s life story, including visiting sights Odette lived and hid during the war. Meyers was herself a poet and teacher and eventually Macdonald decided that the best way to “bridge the gap in time” to connect children of today with Odette was through verse.  The result is Odette’s Secrets and I can’t wait to read it!

The USBBY reception was a wonderful kick-off to Midwinter!  Not only was it amazing to meet new colleagues but it really got me passionate about learning more and promoting to my patrons more international literature.  Did you know about the  USBBY Outstanding International  Book list?  Can you think of ways it might be useful in your library?  I can’t wait to get home and buy new books!