Whatever platitudes we spout about judging books by their covers, the truth is almost everyone does just that. A book with a cover deemed “boring” by children is going to live a sad life in the library, a life of watching other (perhaps lesser) books get checked out thanks to their snazzy, eye-catching covers while it sits on the shelf, eventually getting weeded due to low circulation.

Such would be the ignoble fate of one particular book in my library were it not for the fact that someone whose judgement I trusted implicitly once gave it to me as a birthday present. I was not enthused about the cover either – it is very staid and brown. But oh! The story inside its pages is perfection. 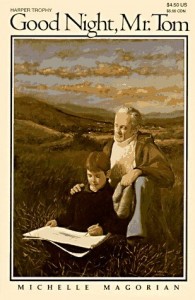 In case you haven’t read the title of this post, the book in question is Michelle Magorian’s 1982 masterpiece Good Night, Mr. Tom. It won the IRA Children’s Book Award the year it was released, and no less than The New Yorker called it “An engrossing and poignant story.” Good Night, Mr. Tom tells the story of William Beech, a young boy evacuated to the country with thousands of other children at the start of World War II. Taken in by a widower named Thomas Oakley who hates everything about being alive, William is initially terrified of his new guardian. Mr. Tom eventually realizes that William has arrived from an extremely abusive home – he is covered in welts and bruises, and his religious mother has packed the belt she uses to beat him should he misbehave. Mr. Tom and William must save each other as war rages all around them.

This is not a light-hearted story. The author does not shy away from descriptions of abuse, nor does she spare details when describing the horrors of the Blitz, which effect more than one character in the novel. However, there is a sweetness and a goodness to this story which balances out its more heartbreaking aspects. Its sense of place is phenomenal. You come to love the characters in the small village, and as the book lasts for most of the war, you also begin admiring their courage and every day heroics.

I was recently talking about this book to one of my coworkers. She looked up the title on Wikipedia and informed me that it’s been adapted four times! It has been a musical (which I must admit I cannot possibly imagine) twice, a play once, and in 1998 it was a TV movie. I started hunting and immediately discovered that the entire movie is available on youtube. 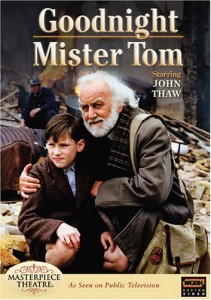 The film is well-acted and well scripted, but since it’s trying to condense so much plot into 90+ minutes, things get left behind. I particularly wished for more scenes of the growing friendship between William, terrified about going to hell, and the Jewish evacuee Zach. Their friendship forms an important layer of the story, and I missed it in the film. However, Mr. Tom is just as I imagined he would be. Gruff and with an accent that can be hard to understand (an accent that is replicated in the text), John Thaw makes a perfect Mr. Tom.

Good Night, Mr. Tom is a beautiful work of historical fiction, with a well-made film to go along with it. I cannot recommend them highly enough.