A tornado funnel cloud was forming over my desk on Monday. The Friday before, a patron had stopped by and asked, “Where’s your Facebook page? I can’t find your library on Facebook.”

A Facebook page. The concept had been simmering on the backburner of my Things-to-Do longer than a pot-au-feu in a French kitchen. Still wasn’t done though.  So I did what I always do in these cases. I grabbed at the patron’s lapels and pulled.

“How about if you give me a little help in setting that up?” I asked.

“Sure! I do two community Facebook pages already, and I’d be glad to help. I’ll bring my Nikon too.”

Couldn’t be easier, huh? Then on Monday, I learned that Facebook does not permit libraries to set up profiles, which are for people, only pages, which are for companies and organizations. “But you don’t want to do that,” Patron advised. “I hate pages. Let’s set you up as a profile anyway.”

We were downloading things, and clicking off security setting boxes, and taking pictures, when a little girl I’ve known for quite a long time came up shyly, her mother and brother standing behind her for strength.

She handed me Flat Stanley. A simple Flat Stanley, downloaded from www.flatstantley.com and crayoned in, not very skillfully.

“Kalani’s school is doing Flat Stanley, and she was wondering if you could take him around and take pictures of him,” her mother asked. A lovely woman, she was also transmitting, THIS IS AN IMPORTANT OCCASION IN MY DAUGHTER’S LIFE SO DON’T SCREW IT UP.

Honored but stymied. I’d never had a Flat Stanley visit before. At the end of the day, I had a Facebook profile which hyphenated my library’s name and assigned it a “her” pronoun and a Flat Stanley I had to show a good time. My life is staid to say the least. I don’t drive a car (seizure disorder), so I couldn’t take Flat Stanley out to see the sights. And the thought of remaining Gulf Beaches-Library made me queasy. I went home.

The next afternoon, I asked a visiting teacher if she was savvy on Facebook.

“Why would you have a Facebook page!” I couldn’t help asking this twelve year old child.

“For fun. I wanted to make a Harry Potter page.”

A few minutes later, I had a new Facebook page not profile, and she sat down to a book. “I could never be bored in a library,” she said. “You can go anywhere in a library.” We look so hard to find things for our volunteers to cut out and sort and put away, but teen volunteers are wonderful just to have around. I realized (out of the mouths of teen volunteers) what pictures of Flat Stanley I would take. I didn’t have to take him to Paris, or even to the beach. I’d show him a good time at my library like the good youth services librarian I am.

My library is Gulf Beaches Public Library now, and we have three likes, from me, my cousin, and someone who works here. We’re hurtling into the twenty-first century. And I put Flat Stanley in the mail Friday. The best outreach I’ve done in a while! 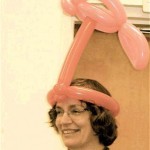