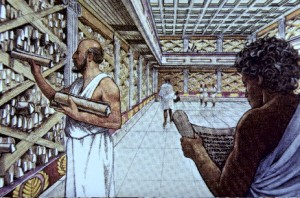 When I was in library school I had to do a two page paper on a famous librarian. I chose Hypatia and was surprised to learn that she was not, in fact, a “librarian” per se; she was a mathematician, philosopher, astronomer and teacher. She was not an expert in metadata. She did not direct people to websites for finding employment, add subject headings, perform little rabbit foo foo at 10 AM on Thursdays, tweet about the library’s plant exchange, direct parents to materials for dealing with fluffy’s death, or attend city council meetings (or, perhaps she went to one too many…?)

I don’t want to belabor this metaphor too much, and I also don’t want to downplay the value of our current definition of what it means to be a librarian. But an idea has been humming in the back of my head ever since I began using digital media in storytimes  and creating a community of practice at LittleeLit.com; there is a huge potential for a complete revision of what the role of a children’s librarian now that the middle men (publishers, vendors) are now running around like loons trying to figure out how to move forward with new business models around digital and interactive media for children.

A colleague of mine, Henry Bankhead (Los Gatos Library) has been talking about this kind of thing for awhile and has implemented a pilot project with Smashwords that lets authors publish their work through the library. I think it’s a great idea; libraries used to be the place where the big ideas were conceived, written down and organized (on scrolls no less; imagine attaching a genre sticker or spine label to one of those bad boys!) Sometime between Hypatia’s time and now, instead of being the ones that developed the content, librarians became stewards of other people’s content. It’s a beautiful thing, I know, and there is much to be said for the objectivity that comes with it.

Children’s librarians are knowledgeable in children’s content, child development, early literacy, and explaining to parents how to support their child’s literacy development with high-quality materials. At least, we SHOULD be experts in those things; whether library schools and in-house professional development initiatives train us to be experts in those areas is an entirely different conversation. Now that technology has made it so easy for anyone to produce their own content (7 year olds are building their own apps now!) children’s librarians have an opportunity to go back to being the people who CREATE the resources, not just the ones who point to them on the shelf.

The Calgary Public Library has come out with a fantastic app based around Every Child Ready to Read 2 called Grow a Reader; they’ve developed an awesome tool for parents and librarians alike. What else can we begin producing? Our vocabulary is changing; we STILL don’t really know how to succinctly define what an app is versus an eBook, and the publishing/app development worlds are still in the middle of a huge upheaval with no end in sight that will make things as easy as they were when books only came in paper form. Instead of fretting about it, why not push beyond our role of “steward” and become creators of more content ourselves, and enable the children and families we serve to do the same? Why not publish children’s interactive media through libraries like the Los Gatos Library is doing with eBooks? Why not produce the tools we need to serve our communities instead of paying a third party ridiculous amounts of money to do it for us (badly)?

What else could we create within our libraries?