During World War II, my Dad was a young soldier about to go overseas when he found out that his two brothers were missing in action. He was far from home. Worried and alone. Moina Belle Michael took time each day to sit and chat with him. The thoughtful gesture was second nature to Moina. She had done the same for soldiers and their families ever since World War I when she established the red poppy as a symbol to honor and remember soldiers who never returned home. 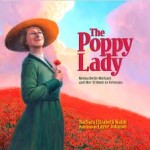 My Dad wanted others to know about Moina and inspired me to write her story. In my picture book, The Poppy Lady: Moina Belle Michael and Her Tribute to Veterans, I wrote about how the idea of the Flanders Fields Memorial Poppy first came to Moina and how she made it grow.

It was not an easy achievement. But Moina was used to challenge. Born in Georgia, four years after the Civil War ended, she had grown up watching her parents and neighbors endure hardships. From an early age, Moina tackled obstacles armed with her favorite motto:

“Whatsoever your hands find to do, do it with all your might.”

When America entered World War I Moina set her mind to do all she could do for soldiers. In Georgia, she knitted socks and sweaters and rolled bandages for the Red Cross. In New York City’s Y.M.C.A., she transformed a dreary room into a cheerful meeting place where soldiers could spend time with their families before going off to war.

While serving at the Y, Moina had a deeply personal reaction to a war-poem and its vivid illustration picturing a battlefield covered in white crosses and bright red poppies. Although she had read the poem many times before, this time felt different. Why was she so moved at that moment? Moina believed it was the “environment” surrounding her and the scenes unfolding around her.

The young wife who traveled from California to New York to claim the body of her soldier husband. Moina had accompanied the woman to a storage area below Grand Central Station. To an “endless area” of flag-draped caskets waiting to be sent back home.

The woman who appeared before Moina’s desk dressed in black and weeping inconsolably. Her only son had gone down on a transport and the mother’s heart was broken knowing she would never be able to place flowers and a flag on his grave.

The young soldiers who came to say good-bye before leaving to fight overseas. Many were Moina students and friends. Some she would never see again.

After reading the poem Moina made a promise. She would always wear a red poppy to remember the soldiers who brought “peace to the war-weary world.” And for the rest of her life she worked hard encouraging others to do the same.

Layne Johnson recognized Moina’s sincerity. Thanks to his beautiful illustrations Moina’s determination and compassion shine through on every page. 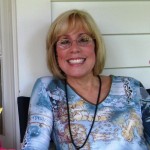 Our guest blogger today is Barbara Walsh, author of The Poppy Lady: Moina Belle Michael and Her Tribute to Veterans. Check out the booktrailer for this book or read more about Barbara at her website.