This past weekend I saw Peter Jackson’s The Hobbit: An Unexpected Journey, part one of a planned three-part adaptation of J.R.R. Tolkien’s Lord of the Rings prequel The Hobbit. I went with two other people. I loved the film. My father thought it was an hour too long. And our third companion thought it was “entertaining but not great.” Those three reactions sum up the critical response to the film, which unlike the award-winning Return of the King has been getting decidedly mixed reviews.

When I first heard Peter Jackson was adapting Tolkien’s 200+ page book into not one, not two, but three movies I was  a little surprised. Unlike the Lord of the Rings trilogy, which naturally lent itself to three films, this book didn’t seem to have the source material to last for three films, especially when I learned that An Unexpected Journey was over 2.5 hours long! And yet, as previously mentioned, I adored the movie. I am forever a fantasy junkie, and the care and sense of wonder that Peter Jackson infused LOTR with is definitely present in this film as well.

This adaptation of The Hobbit stands out to me as an outlier of book-to-film transitions, in that it almost exactly duplicates the first six chapters of the novel. In some cases, whole chunks of dialog and songs are reproduced in 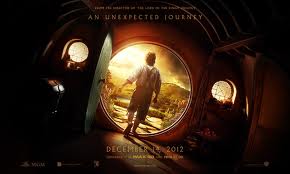 their entirety, and Peter Jackson went so far as to have the dwarves arrive in the same order that they do in the book, with the same greetings and the same reactions by Bilbo Baggins to each arrival. The attention to detail is intense. And truly, enough happens in the first six chapters of the book to warrant a whole film. Bilbo is unwillingly drafted into an adventure by Gandalf, meets a party of dwarves on a mission to reclaim their homeland, visits with elves, fights goblins, and has a riddling contest with Gollum, deep in a cave under the mountain. To trim the run time (169 minutes is a loooong time) the film could have left out one or both of the dwarf songs in the first part of the story. They did stop the forward action of the plot. Otherwise, I have been converted – I think three movies makes perfect sense.

The cast is uniformly 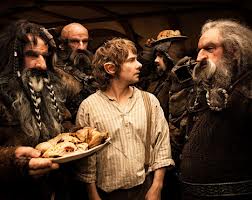 excellent. Martin Freeman is the perfect combination of hesitant and bold, and brings a real spark to the character. He has been a favorite of mine since the BBC version of The Office, so it’s wonderful to see him on the big screen. Richard Armitage, another BBC favorite of mine (North & South), gives a stirring turn as the dwarf-prince Thorin. And all your favorite characters from the original trilogy – Gandalf, Elrond, and Galadriel – are present and accounted for. Even Frodo makes an appearance!

For fans of the original book, for children who missed out on the previous film trilogy (which are almost a decade old), and for those who are simply curious, I highly recommend this adaptation.