New month, new displays in the Children’s Room! My librarian A put up an awesome bulletin board after Summer Reading Club wound down and I just changed out our book displays, so I wanted to show y’all what we’ve done.

First, the bulletin board: 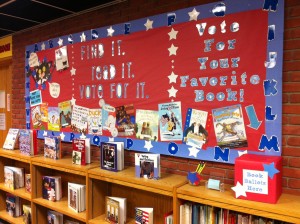 A does amazing bulletin board for us, getting lots of inspiration from Pinterest and from the programs and activities we have going on in the Children’s Room. With the election coming up, she wanted to feature related books in our collection. The release of Bad Kitty for President by Nick Bruel (Roaring Brook Press, 2012) was a great excuse to feature Bad Kitty, already a popular character with our kids. We’ve been stocking up on election books because it’s sure to be a popular topic as we get closer to November’s Presidential election. Consider featuring some of the following:

In addition to our new bulletin board, I changed our book displays out last week.

I put up Guys Read, one of my favorite displays because I think it can be tricky for boys (and parents) to find books that interest them (especially if they don’t think they like to read). Of course, there’s nothing saying that girls can’t be interested in these books, too, but I hope a bold GUYS READ sign will attract boys to browse there: 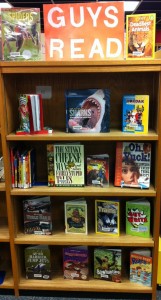 Some of my favorite books to include in a Guys Read display include:

And I happen to have three staff members (in a team of six!) who have birthdays in September (and the son of one of my librarians in late August), so I had to do a birthday display! 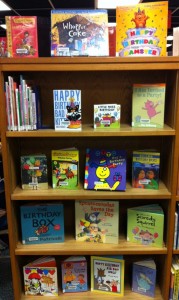 Consider displaying some of the following:

Those are our September book displays in the Children’s Room! What book displays do you have up right now? Any unique display themes to share?