I know your library’s probably closed for the holiday, but here are some patriotic storytime ideas for when you get back (or next summer… or for Patriot Day in September!): 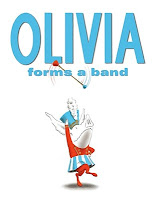 Olivia Forms a Band by Ian Falconer – When Olivia finds out that there won’t be a band for the evening’s fireworks display, she’s determined to start her own band to play.

Fourth of July Mice by Bethany Roberts – Simple, rhyming text takes us through the day as a family of mice celebrate the Fourth of July, from marching in a parade to playing baseball to sharing sparklers on a summer’s eve.

Mouse’s First Summer by Lauren Thompson – Mouse does many summer things in this sweet, simple book, including celebrate the Fourth of July.

Happy 4th of July, Jenny Sweeney! by Leslie Kimmelman – People all over the town get ready for their Fourth of July celebration. 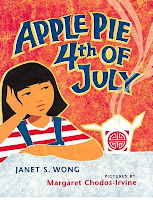 Apple Pie Fourth of July by Janet S. Wong – A Chinese-American girl worries that Americans won’t want to eat the Chinese food her family is preparing at their restaurant, but she’s pleasantly surprised to find out that people DO want to eat Chinese food on July Fourth.

How to Bake an American Pie by Karma Wilson – Rhyming text presents things that make America great: a thirst to be free, a giant melting pot, etc.

Sing some patriotic songs or play recordings and march around the room or use scarves, bells, or Mel’s flannel rings (see below) for kids to dance or play along.

Take Me Out to the Ballgame (hey, baseball is America’s pastime, right?) 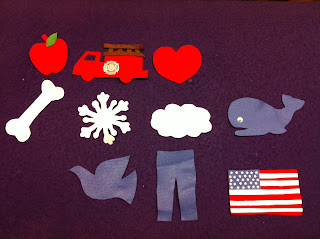 Red, White, and Blue… This is our version, adapted from the version that Mel posted about last year. It’s a silly color game – just put the red things on the board, one at a time, naming them:
“This apple is red…. This fire enhine is red… This heart is red…” and then put up one of the white items:
“This bone is red…. NO! That’s not right! This bone is… white!” and so on. The flag (red, white, AND blue) is the last thing that you put up. 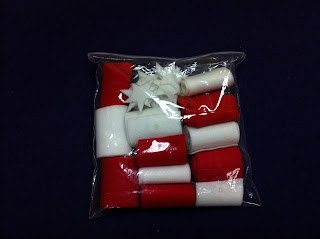 Have the children help you build an American flag! We have the red and white stripes and white stars here. You can either pass them out to the kids and have them bring up the pieces to help you make the flag or ask the kids what you need for the flag and then put the pieces on yourself.
10 Little Fireworks (found on Early Years Foundation Stage Forum):

10 little fireworks standing in a row

10 little fireworks standing in a row

When one little firework decides it’s time to go

There’ll be 9 little fireworks standing in a row…

Make red, white, and blue felt rings for your kids with these simple instructions from Mel’s Desk. These would be super fun to use with patriotic music.
Mel’s also got a post with more patriotic books, rhymes, and songs.
Here’s hoping that these suggestions SPARK some ideas for your next patriotic storytime! What other books, rhymes, props, or songs have you used for a Fourth of July (or Flag Day or Patriot Day or American) storytime have you used?
— Abby Johnson, Children’s Manager
New Albany-Floyd County Public Library
New Albany, IN
http://www.abbythelibrarian.com
Share on FacebookShare on TwitterShare on Linkedin