The American Library Association’s Stonewall Book Award honors books of exceptional merit relating to the gay, lesbian, bisexual, and transgender experience. It was the first, and is the most enduring, GLBT literary award. I have had the honor to serve on the Stonewall Book Awards Committee this year, and last year. As a member of the committee, I help to select the winners of the Barbara Gittings Literature Award, the Israel Fishman Non-Fiction Award, and the Mike Morgan & Larry Romans Children’s & Young Adult Literature Award.

The American Library Association has an illustrious history of celebrating diversity. ALA’s Gay, Lesbian, Bisexual, and Transgender Round Table was the nation’s first GLBT professional organization. Take a look at this picture (recently featured in LifeMagazine.com’s photo essay “Let Fury Have the Hour: Early Days in the Fight for Gay Rights”): 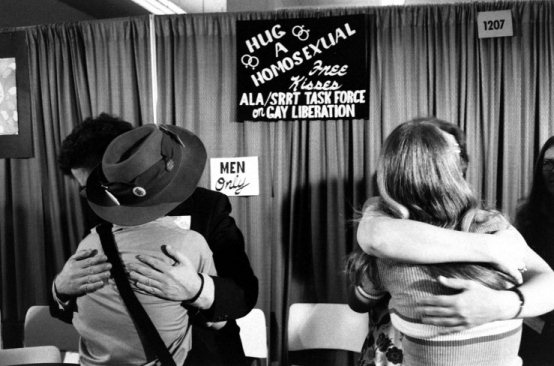 It was taken at the 1971 ALA annual conference in Dallas, TX, where Barbara Gittings helped organize a same-sex hugging booth. I’m personally very proud to be part of such a forward thinking field as librarianship!

I’m a big believer in the power of reading. I don’t know if books can save lives, but I do know that the right book, in the right hands, at the right time, can have a transformative effect on a person’s life. That’s why I am personally passionate about positive and realistic portrayals of the GLBT community in literature, especially literature for young people. As a wise librarian once taught me, books in the public library should be windows and mirrors–we want our customers to be able to learn about people from different walks of life, as well as see themselves in the materials we offer on our shelves.

I have personally witnessed the empowering effect an affirmative book about GLBT people can have on a questioning young person. It says: You are not alone. There are people like you. There are people who will support you. And, to quote Dan Savage, Terry Miller, and countless others, “It gets better.” There are people young and old, gay and straight, in our communities who can benefit from the message of this literature, and the public library should be a natural place for them to seek and find it. In addition, the number of children from families with same-sex parents is growing. 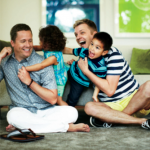 There are “rainbow families” in our communities who appreciate books that celebrate their specialness. One of the things I love about working with children is that I find them, in general, to be curious and non-judgmental about what makes each and every person unique.

In that spirit, here are few books for children that I’d like to share with you, about how it is okay to be special: 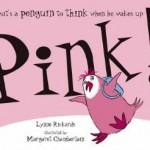 Patrick the penguin is positively mortified to wake up one morning to discover he has turned pink. Whoever heard of a pink penguin? And he’s a boy! Boys can’t be pink! Patrick’s father shows him a book with flamingoes in it, assuring him that indeed boys can be pink. But a pink penguin is still highly unusual, and when Patrick goes to school the next day, his classmates laugh at him. So Patrick decides to join the flamingoes. He swims all the way to Africa! But he just doesn’t fit in. They don’t eat the same things he likes to eat, and they sleep standing on one leg, and they fly! Patrick swims back to the South Pole to find that everyone has missed him so much, and they are so impressed by his long journey. Patrick finds out that his friends and family care for him, and that it’s okay to be pink, even if it’s not the norm.

Christian, the Hugging Lion by Justin Richardson and Peter Parnell 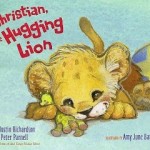 From the authors of And Tango Makes Three, this book is also based on a touching true story. In London, in the swinging 1960’s, the department store Harrods had an exotic animals department, where two men, John and Ace, bought a lion cub together, and named him Christian. John and Ace were sure a store was no place for a lion to live, but soon learned their home was unsuitable as well. As Christian grew bigger, it became evident that he really belonged in the wild, and although John and Ace loved Christian very much, they took a trip to Africa, and left their lion in the capable hands of Mr. Adamson, a man who trains lions to live in the wild after being in captivity. After a year, John and Ace wanted to visit Christian. Mr. Adamson informed them that Christian was fully wild now, and would probably not remember them. But he was wrong. When John and Ace encountered Christian in the wild, the lion flew into their arms, embracing them each in a giant lion hug! If you want to see for yourself, footage of Christian and his “dads” is easy to find on YouTube.

Monday is One Day by Arthur Levine 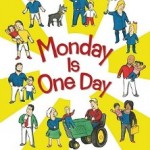 Monday is the worst day of the week for many families. It means the end of the weekend, a traditional time for togetherness, and the return of moms and dads to work. But saying goodbye as parents head off to their job doesn’t have to be sad. This book offers fun activities you can do to help mom or dad get ready. Can you splash in the puddles on the way to the bus stop? Can you help daddy pick out his tie? Can you give Eskimo kisses at breakfast? This book is really a love letter to children from their caregivers, as Monday is just one of the days to count down to another weekend of fun. The book’s illustrations feature many different types of families: grandparents raising a little boy, a single mom, a pair of dads, etc. These families may look unique, but they all have something very important in common: They love spending time together! 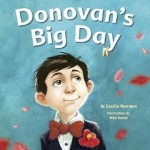 Donovan is going to a wedding. There are many things he needs to do and remember! He must make sure his hair is combed and his teeth are brushed. He must be careful not to dirty his suit, so he can look his best! He must not dilly dally around, as there are places he needs be at certain times. As the ring bearer, he must make sure he walks down the aisle very carefully, and holds the box very steady. Because today is a very important day. It’s the day his moms are getting married! All their friends and family are at the church, so happy for Donovan and his moms. Donovan is so proud of how beautiful his moms look in their white outfits. When the “tall grown-up in the long black robe” pronounces them wife and wife, everyone claps, whoops, whistles, and hollers hooray! There’s just one more thing Donovan has to do… Kiss the brides!

A Mother for Choco by Keiko Kasza 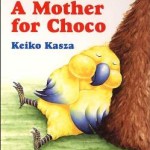 Choco is an adorable little bird who doesn’t know who his mother is. There are no other animals that look just like him. The giraffe is yellow like Choco, but doesn’t have wings. The penguin has wings, but no big, round cheeks like Choco’s. After searching and searching fruitlessly for his mother, Choco begins to cry. That’s when Mrs. Bear finds him. She might not be Choco’s real mother, but she can hold Choco, and kiss him, and cheer him up. Mrs. Bear offers to be Choco’s mother. Choco is hesitant at first, but when he meet Mrs. Bear’s other (adopted) children–an alligator, a pig, and a hippo–he realizes this is a family he can truly belong to. Because being a family doesn’t mean looking like each other. It means love, laughter, and maybe some pie…

Odd Bird Out by Helga Bansch 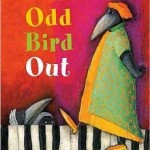 Robert the Raven isn’t like all the other ravens in the tree. He likes to wear bright colors while all the other ravens wear black. He likes to tell jokes! And most of all, he loves to sing. The other ravens do not approve of Robert’s abnormal behavior and one day pressure him leave. Robert is sad the other ravens don’t want him around, but he soon finds another tree, with birds that accept his unique personality, and encourage him to sing loud and proud! He reinvents himself, becoming the fabulous Bobby Raver! And the ravens from his old tree eventually realize that life is a lot less interesting without Robert around, and come to embrace Bobby’s music and style. It just goes to show, no matter how “odd” others might think you are, just keep marching to the beat of your own drummer, and things will work out.

Which titles for kids do you think best celebrate diversity? Share them in the comments below. 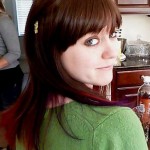