It all ended with a bear in a pink tutu sitting on my keyboard. 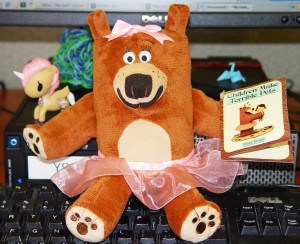 I arrived in my office weary and weighed down with books on Tuesday, January 24th, still in recovery mode from my whirlwind trip to ALA Midwinter where I had participated in my first ever ALA Award Committee. I opened a package on my desk and there she was…Lucille Beatrice Bear.  Star of the 2012 Carnegie Medal winning film Children Make Terrible Pets. Her pink bow slightly crooked on her square bear head. It was the perfect end to an incredible experience.

In October 2010 I received an e-mail from then ALSC President Julie Corsaro inviting me to become a member of the Notable Children’s Videos and Carnegie Medal Committee. I had just finished my year as an ALA Emerging Leader and was eager to get more involved with ALA and ALSC. 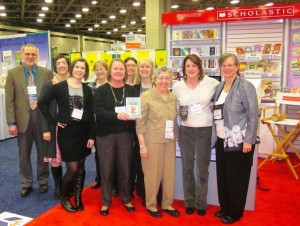 I began my two year appointment on the committee at ALA Annual in New Orleans. This was my first chance to meet the incredible group of people I would be working with over the next several months. We watched videos, discussed, and organized our procedures.

When I returned home to Tulsa, the boxes had begun to arrive. DVDs everywhere! I spent whole days watching DVDs and taking notes. Lots of coffee was required.

In December our online balloting began in earnest to narrow down our list. This was my first look at just how difficult it was going to be to decide on the Carnegie Medal winner. I found so many things I loved about so many titles!

At ALA Midwinter in Dallas, our group got to work early Friday watching, discussing, critiquing, and making further cuts. The anxiety had really begun to set in and we had lengthy and detailed discussions of many fabulous films. We watched some titles so many times the theme songs began to stick in our heads! By late Saturday evening, we had made our decision and were giddy with our success! We set to work writing annotations, putting together quotes for our press release, and preparing our Notable List.

It was hard, hard work. Much harder than I had ever expected. It put in perspective for me the many stories I had heard from colleagues about serving on the Newbery and Caldecott committees. The decision making is difficult, but the results are so rewarding!

On Monday morning I crossed an item off my “library bucket list” as we all attended the ALA Youth Media Awards. When our choice, Children Make Terrible Pets, was announced and a clip from the video played I felt incredibly proud of the work our committee had done!

It was a surprising, educational and rewarding experience! I am ready for round two!

Thank you to Martha Seif Simpson, Marilyn Ackerman, Linda Ernst, Linda Gann, Suzanne Myers Harold, Lindsay Huth, Gwen Taylor, and Joanna Ward. Working with you wonderful people is what made this experience so, so special!

Our guest blogger today is Emily Tichenor. Emily is the Children’s Services Coordinator at Tulsa City-County Library; she can be reached at etichen@tulsalibrary.org.