Many people in the world of children’s literature are curious about how books are converted into apps. I’m a children’s picture book author/illustrator with two apps out in 2011, so here’s my experience with the process.

Fifteen months ago I was approached by Omar Curiere of OCG Studios in The Netherlands. He had sent me a “fan” letter about my maze books a few years ago on behalf of his then five-year-old son. Now he wanted to make apps, and thought some of my work would lend itself well. I was delighted.

“Roxie’s a-MAZE-ing Vacation Adventure” is an interactive animated (sounds, moving parts, etc) game app for the iPad, iPhone, and iTouch.  It isn’t a direct book-to-app conversion, but is based upon my five published maze books. We decided that I should do new work for it. I designed a maze game, and made a quick three-day trip to Holland to discuss technical and creative issues (didn’t really have to go; it could have all been done via email). 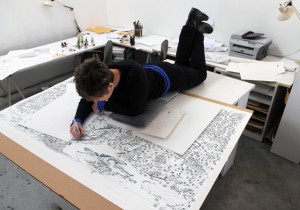 I created a giant (42”x60”) maze, and almost 400 spot illustrations to animate. It took three months to execute the detailed and complex maze, and another month to do the spots. Two OCG Studios employees spent three more months making the app. Special music was commissioned over there. The app was extensively tested, including a session with 150 students at a local elementary school. Much more than an enhanced e-book, it’s an interactive game – a random maze, with animations, sounds, and items to find. 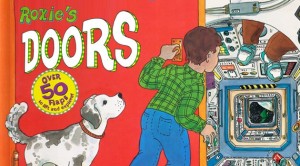 “Roxie’s Doors,” for the iPad, is a direct book-to-app (3-D, animated, with voice-over, sounds, and many things to search for). When the rights to my lift-the-flap book, “Doors” (Chronicle, 2004), reverted to me two years ago, I also requested the art scans (authors: do this as soon as your book goes OOP). So I was able to transfer large high quality digital files via email to the developers. They spent three months creating the app. I illustrated more spots to animate, and did the voice-over in a studio here in New York (you can also choose a male reader, or read it yourself).

We hired a graduate student for six months to do marketing (very important!). Regular book review venues are not always helpful with apps. You have to reach individual parents, and the audience is worldwide. The maze apps sell in 64 countries (no language issue) and the Doors app, which is in English, sells in 24 countries.

The important thing, always, is to think of your audience… those who seek out and engage in the creative product. Some books are not particularly appropriate for development as an app, as wonderful as they may be in print.

Links:
For 60-second trailers and detailed information, including photos, on the process of creating both apps, in the US and in The Netherlands, go to: 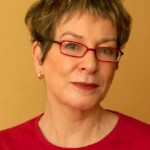 Our guest blogger today is Roxie Munro. You can find out more about this amazing artist, lecturer and author/illustrator of more than 35 books for children at  http://www.roxiemunro.com/. You can reach Roxie at roxiesstudio@gmail.com.