Once upon a time, a colleague asked me, “Would you be interested in reading for an awards committee?” I thought, “Absolutely!!! How could I say no? That would be awesome!!! You want me? You really want me?!” I think what I actually said went a little more like, “Sure! I’d love to.” And thus began my introduction to the Maud Hart Lovelace Award.

Maud Hart Lovelace is a beloved Minnesota author of children’s books, best known for the Betsy-Tacy series. In 1979, a group of book lovers decided to start a student choice award and named it after the author. They divided up the state into regions according to regional library systems, giving each region a vote in choosing nominees for the award.

Every month, I meet with an amazing bunch of professionals (library media specialists, reading teachers, public librarians, etc.) and book talk. Worthy titles are submitted to a state list of hundreds of books. In October, we stop taking new submissions, weeding the titles down to a “Short List”. By January, the regions submit their favorites and regional representatives meet to discuss, choosing the final nominees for the following school year.

Finally, the students read the nominations and vote for the winners. Two divisions cover grades 3 – 5 and 6 – 8, with some of the books considered “Crossover”, appearing in both divisions. The two winners are announced on Maud Hart Lovelace’s birthday on April 25th every year.

I’ve had the best time over the last few years reading some outstanding children’s books. If your state has a student choice award, I would highly recommend getting involved. The more readers, the better the selection of books for the nominees. I’d like to share two of my favorites from this year’s round of reading. 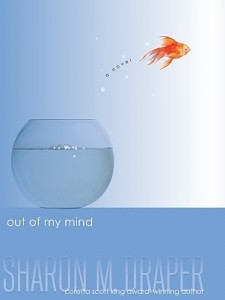 Every once in a great while, you find a book that is so meaningful, you want to buy a whole box of them, stand on a corner and hand them out to everyone who passes. This is that book! Told from the point of view of Melody, an eleven-year-old with a photographic memory, Out of My Mind explores the classic theme of “judging a book by its cover” in an unforgettable story. Because of cerebral palsy, Melody has no control of her muscles, but she’s possibly the smartest kid in school. No one knows just how smart she is until technology comes to the rescue. The story relates Melody’s heart-rending loneliness and then her sudden inclusion due to a special computer and the adjustments made by all in between. This isn’t just a “must read” book, this is an “everyone must read” book!

One of the more entertaining reads of the list this year, The Case of the Case of Mistaken Identity, told by seventh-grader Steve Brixton, an avid fan of the Bailey Brothers book series (think Hardy Boys) starts with a bum deal of a report assignment: needlework. When he checks out the one book from the library available on the topic, suddenly figures in black rappel in from above, breaking in through the windows. Steve finds himself involved in a national mystery with a quilt containing the nation’s secrets and the most covert crime-solving agencies: the United States Department of Library Services. Nowhere else will you hear the statement, “The bookmobile steamed and roared in deadly pursuit!”

Our guest blogger today is Laura Randolph. Laura, an ALSC member, has worked in the Children’s Division of the Rochester (MN) Public Library for the last 12 years. She has read for the Maud Hart Lovelace Award Committee since 2004 and currently represents Southeast Minnesota on the Committee. She strategically places “books in progress” in multiple spots in her home, at work, in the car (audio), on various mobile devices and was once asked if an IV drip would better suffice. Laura can be reached at LRandolph@rochester.lib.mn.us.