My next book is Grandfather Gandhi, a picture book that I co-wrote with Arun Gandhi–grandson to the Mahatma. Upon learning this, I am most frequently asked, “How did you meet Gandhi’s grandson?’’ My answer isn’t a short one. I didn’t run into Arun Gandhi at the grocery store, or a dinner party. We weren’t colleagues or long lost college friends (though we now are facebook friends). What led me to meet and later ask Arun to work with me was a devastating act of violence–9/11.

In 2001, I was an aspiring author. I worked as a receptionist on the 31st floor of the World Financial Center, diagonally across the street from the WTC towers. I was there that Tuesday morning, and not only was I there, I was a fire searcher for the financial firm I worked for and was one of the last to evacuate our top floor. (For more of my 9/11 experience, see here.)

The sights and sounds of that day broke me, as it broke so many of us. In late October, still haunted by nightmares and visions of people jumping to their deaths, I attended a talk Arun Gandhi gave at Town Hall. There he spoke to a packed audience about the two years he lived with Gandhi at the Sevagram ashram as a boy. Arun stood before us and shared how in South Africa, where he was born, he was beaten by whites for being too dark and weeks later beaten by Zulus for being too light. He was aware of his grandfather’s work, and his father, Manilal’s. He lived at the Phoenix ashram. He was raised with the concept of non-violence, but that didn’t stop Arun from carrying rocks in his pockets and subscribing to the Charles Atlas bodybuilding program to build muscle for if and when he would be attacked again. Arun was not going to strike first, but he was going to strike back. That is, until his grandfather sat across from him and shared a life-changing story of how anger can be like electricity.

I sat in my wooden seat in the middle of Town Hall and turned to a friend and said, “These stories would make a beautiful picture book.” She agreed. But it was an idea for someone else. Not for me. I left Town Hall, after hearing Arun speak, stronger, less broken, and more able to forgive, albeit slowly. I took the postcard advertising the event with Gandhi’s strong and serene face, back to my desk in a new office building in midtown. (The company I worked for was displaced from downtown due to the devastation.) I continued answering phones, greeting guests, and working on my first novel. But that small thought–that Arun’s stories should be a book did not leave me.

Surely, they should be a book but I wasn’t the one to write them–I was a young white woman. I knew little about the Quit India movement or Gandhi’s work aside from feeling gratitude that he inspired Dr. Martin Luther King Jr. , a personal hero of mine. I had these reasons and many more. I wasn’t published. Who was I to think he would work with me? Then, I distinctly remembering hearing my inner voice saying, “Gandhi wouldn’t see you as less than. Why should you?” But how would I get in contact with Arun? Seeing him speak was not the same as meeting him face to face and shaking his hand. In America, you needed an in–and I had no “in.”

Writing a picture book that touches on world events, Apartheid, violence, internal anger, Gandhi’s work, and who he was not only as a world leader but also as a grandfather–and that for me carried with it memories of 9/11– was difficult to say the least. It took ten years to get the manuscript “right.” It took many drafts, many emails and phone conversations, one meeting at Arun’s home in Rochester, New York (where I had the pleasure to meet his wife, Sunanda, before her passing.) It took finding the right editor, Namrata Tripathi, whose mother had once been an Ambassador from India to the UN. It took Justin Chanda, head of three imprints: Antheneum, S& S BYR, and McElderry, to sign off on it after a year’s worth of revisions. It took Namrata an extensive illustrator search, before the manuscript was given to new comer, Evan Turk to illustrate. And that is where the project sits now. It is in the process of coming to life, in Evan’s nimble hands.

The fact that it will be a book, something real for me to hold in my hands–something for Arun and me to share with the world–does not erase the pain and the devastation of 9/11. But the book being born out of that day reminds me of the story Gandhi shared with Arun–of anger being like electricity. That if reactive it can be destructive–like lightning, but if channeled–if harnessed–it can shed light, like a lamp.

Books shed light. Librarians are the keepers of that light. It is my hope and Arun’s that Grandfather Gandhi shines in the hearts of its readers–those who may not know the book came to be because of 9/11, but who will be moved by its beginnings, nonetheless. 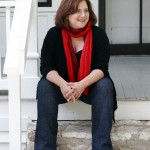 Our guest blogger today is author Bethany Hegedus. Bethany’s books, Truth with a Capital T (Delacorte/Random House) and Between Us Baxters  (starred) (WestSide Books) were both named as Bank Street Books, Best Books in 2010 and 2011. Forthcoming, with Atheneum/Simon & Schuster, is the picture book Grandfather Gandhi, co-authored with Arun Gandhi, grandson of the Mahatma. Bethany is the Editor of the Young Adult & Children’s page for the VCFA literary journal Hunger Mountain.  She operates The Writing Barn, a writing workshop/retreat space and all-around book lover haven. She serves as a preliminary reader for a New York publishing company and teaches privately and speaks across the country. A longtime resident of NYC, she now writes from her home in Austin.