Our guest blogger today is Greg Leitich Smith,  author of a variety of books including Chronal Engine to be published in March 2012.

My next novel, CHRONAL ENGINE (Clarion, March 2012)(ages 10-14), is the story of three teens from Austin who use their reclusive grandfather’s time machine to travel back to Cretaceous Texas to rescue their kidnapped sister and solve a family mystery.

When I first conceived of CHRONAL ENGINE, I knew I wanted to portray the dinosaurs and other fauna as realistically as possible.  The challenge in describing the appearance and behavior of dinosaurs is that they have been extinct for 65 million years and there are no living examples to observe (other than birds).

I probably knew more about dinosaurs than the average person, but not enough to write a novel in which the setting and creatures would be developed to their full potential.  For example, I knew that Alamosaurus grew up to 70-80 feet long, but that sort of fact is kind of meaningless and not as evocative as it could be, unless you can relate it to something concrete.  I also knew Alamosaurus was a herbivore, but didn’t know with particularity what kind of plants were available for it to snack on.  And I knew it was a prey animal, but didn’t know specifically what would’ve hunted it.

Which meant, of course, a trip to the library.

A long, long time ago, I had read Robert Bakker’s DINOSAUR HERESIES, but I wanted a more up-to-date resource.  My first attempt was with a volume called THE DINOSAURIA, edited by Robert Weishampel, et al.  Actually, what I did was open it, leaf through a few pages, and realize that I had no idea what the paleontologists were talking about most of the time.  And, there were no pictures.  THE DINOSAURIA was a book by professional paleontologists for professional paleontologists and assumed a level of knowledge that I simply didn’t have.

Then I had one of those “well, duh” moments:  when I had been a young reader, I had become interested in dinosaurs through picture books and encyclopedias for young readers, which were filled with pictures and graphics and facts and factoids.

So I went to the children’s section of the library. 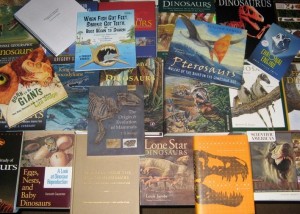 The first thing I discovered (face out) was a ton of cartoon-y anthropomorphized dinosaurs, which were not at all what I was looking for. But then (side out), I found a whole slew of dinosaur and dinosaur-related nonfiction picture books, which showed dinosaurs and other prehistoric creatures in realistic environments as currently understood (and with amazing art).  No longer are sauropods (e.g., “brontosaurus”) depicted as swamp-bound, needing water to support their bulk.  And no longer is Tyrannosaurus rex shown with a posture like that of a large kangaroo.  And some theropods are even shown with feathers.

Pterosaurs are depicted as colorful, active flying animals rather than weird, scaly, winged lizards (See, e.g., Caroline Arnold’s PTEROSAURS: RULERS OF THE SKIES IN THE DINOSAUR AGE).  I even got a sense of what creatures were around before the dinosaurs (See, e.g., Hannah Bonner’s WHEN FISH GOT FEET, SHARKS GOT TEETH, AND BUGS BEGAN TO SWARM: A Cartoon Prehistory of Life Long before Dinosaurs).

Other dinosaur picture books can be found in the Horn Book article, “A Few Good Dinosaur Books.”

The great thing is, picture books like this come out every year:    Although they were released after I completed my manuscript, Lita Judge’s BORN TO BE GIANTS has some excellent real-life and lifestyle portrayals of baby dinosaurs, and Deborah Kogan Ray’s DINOSAUR MOUNTAIN is a solid introduction to some of the history of paleontology.

I also discovered an entirely new generation of A-to-Z dinosaur encyclopedias.  National Geographic and Dorling-Kindersley and other publishers offer books with alphabetical listings and great pictures, including size diagrams showing humans relative to dinosaurs.  They include maps and timelines of where and when particular dinosaurs originate.  They also discuss the other flora and fauna of the three periods of the Mesozoic (Triassic, Jurassic, Cretaceous) and identify which dinosaurs cohabited the same environments (Sadly, even though Disney did it in “Fantasia,” I could not have Stegosaurus fighting a Tyrannosaurus rex).

A step beyond standard A-to-Z dinosaur encyclopedias is paleontologist Thomas Holtz’s DINOSAURS: The Most Complete, Up-to-date Encyclopedia for Dinosaur Lovers of All Ages, which offers extended discussions of the families of dinosaurs, charts of their evolutionary relationships, what is currently known of their behavior, and the like.  Vibrant illustrations by Luis Rey provide realistic and colorful portrayals of dinosaurs in action.  DINOSAURS proved invaluable in both determining which dinosaurs I could use and filling in the rest of the environment.

Once I had absorbed the information from the picture books and young readers’ encyclopedias, I had the context to move on to the more “adult” treatments, including college texts, journal articles (about two to three hundred), THE DINOSAURIA, and other volumes (about twenty, many from the Indiana University Press Life of the Past series). Which made a lot more sense after I’d gained a foundation from the children’s book section of the library.

And, as for CHRONAL ENGINE, did I mention that there will be interior illustrations?

Our guest blogger today is Greg Leitich Smith. In addition to the forthcoming Chronal Engine,  Greg is also the author of Ninjas, Piranhas, and Galileo and its companion book, Tofu and T. Rex.  Greg would love to have you visit his website and blog; he can also be contacted directly at greg AT gregleitichsmith DOT com.