It started with reading about Mrs. Readerpants’s Library Genre-fication Project. I think arranging the fiction by genre is a neat idea and might work really well in a smaller library, but with the size of my children’s collection, it’s just not feasible. I’ve been meaning to create genre book lists, but when I found additional inspiration in Mr. Schu’s masterful use of the laminator, an idea was born: 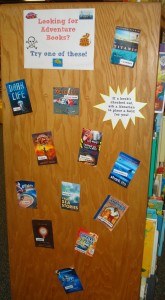 Endcap genre displays! We don’t have a lot of display shelving in my children’s room, so I decided to take advantage of some of the blank space we had. I created simple signs for several different genres and printed out 12-16 book covers in each genre to put up on the ends of shelves. I printed out cover pictures from our online catalog. Although I could include more titles on a book list, I think seeing the cover works better for attracting kids to pick up the books. 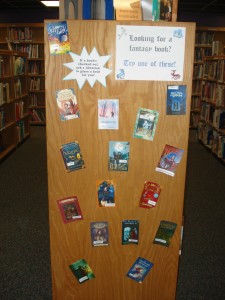 I typed up the call numbers for each of the books represented and added them to the pictures. As you can see, my display books are not laminated (yet!). I lack Mr. Schu’s laminating prowess and I wanted to try them out first before I invested significant time in laminating them. Well… THEY WORK! I was pleasantly surprised to find many of the titles checked out within a week of putting up the displays! 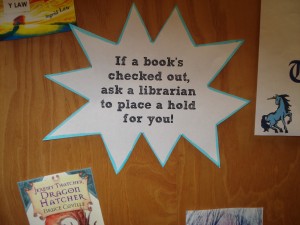 One nice thing about these displays is that we don’t have to refill them, but that also means that some of the titles featured might be checked out. So on each display, I encourage patrons to put books on hold if the ones they want are checked out. 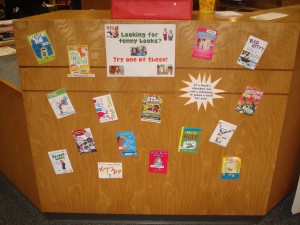 I started with a few genres that are popular and often requested: adventure, funny books, fantasy, and mysteries. I’ll add more as I free up more endcap space (we, um, have lots of furniture…). And, of course, I’ll refresh the books displayed every so often. (Maybe I’ll even laminate the next batch…) 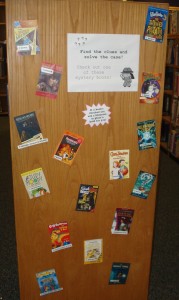 So far, I’ve concentrated on chapter books, BUT I have big plans (BIG PLANS, I SAY) to create some similar displays in the picture book area. Having a display to point people to, say, princess books or dragon books might be worth its weight in gold.