It all began the day that Hope Grietzer and I found ourselves at the Broome County Public Library playing an unrehearsed concert for then-Senator Hillary Clinton. 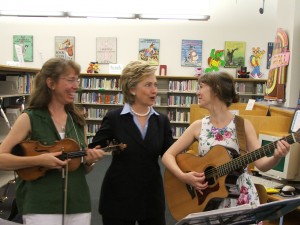 “Gosh! What should we play?!” And, on the spot, we came up with Red-Haired Boy and Arkansas Traveler, which both seemed to suit our audience nicely. Hope, an award-winning fiddler, had just moved back to New York State, and we were friends from the moment we met and discovered our shared love of music and children’s literature. As a parent and library employee, I had knowledge of and access to a limitless supply of books that nearly matched Hope’s fiddle repertoire, and so began a program we could only call “Fiddling with Books.”

Libba Moore Grey’s book When Uncle Took the Fiddle has always been our opener, and I pretend to yawn and doze while Hope plays a snippet of Brahms’ Lullabye. All ages can immediately recognize that tune and how it is our universal musical message of ‘sleep’. Less than a minute later, as Uncle has taken up his fiddle, Hope and I are playing Miss MacLeod’s Reel — also known as Uncle Joe — and we have accomplished two things. First, the children have just heard the difference between violin and fiddle, and second, they have learned that we are not going to read these books, we are going to play them. An example of playing the story is here in Rosie’s Fiddle Medley of Growling Old Man and Grumbling Old Woman / Devil’s Dream which tells the story of Phyllis Root’s book

The pairings of tunes and books happens in a variety of ways. Natalie Kinsey-Warnock’s Fiddler of the Northern Lights (paired with Cold Frosty Morning) and Valerie Flournoy’s Celie and the Harvest Fiddler (paired with Jump at the Sun) have mysterious fiddlers whose music creates magic, so Hope and I connect each with a traditional tune in a minor key that creates the right “feel” for the stories. When we present Marianna Dengler’s Fiddlin’ Sam we help children get a sense of all the occasions when a traveling musician might we needed or welcomed, beginning with the “sad times” as represented by the ancient air Ash Grove and moving on to celebratory events with the Old Timey toe-tapper Shove That Pig’s Foot a Little Further into the Fire. (And, yes, we explain that this refers to raw metal a blacksmith is working on, not a real pig!) As a special treat, we also bring out an old handmade traveler’s fiddle that features a lion’s head just like the one on Sam’s fiddle in the story. Fiddlin’ Sam medley

Sometimes there are fiddle tunes that Hope and I know will be a hit with our audiences, so we try to find a book that will suit the tunes. For example, Old Joe Clark is a classic tune with tall-tale lyrics that we have paired with Anne Isaacs’ Swamp Angel and Phyllis Root’s Paula Bunyan. Old Grey Cat is a marvelously feline tune, and we have found Mary C. Calhoun’s Henry stories (Blue Ribbon Henry and Cross-Country Cat, for two) to have just the right mix of playfulness and “catitude” to work. By far, the most fun was when we searched for a book to partner with Flop-Eared Mule and came across Sue Porter’s Moose Music. The illustrations showing how painfully awful Moose’s cloven-hoofed fiddling must have been is exactly the goofiness we hoped for, and it’s one of our silliest moments. (Yes, I “sing” the part of the moose he finally attracts. It isn’t pretty.) Old Grey Cat / Flop-Eared Mule

Our program usually lasts an hour, presenting 12 books and 12 fiddle tunes and three or four songs for the audience to sing with us, such as Cotton Mill Girls, which we pair with Elizabeth Winthrop’s Counting on Grace, or Jeanette Winter’s Follow the Drinking Gourd. The variety of tunes covers Celtic, French-Canadien, Old Timey, and Cajun, with a mix of airs, waltzes, and clogging tunes, major and minor keys, and ultimately a song in there for everyone to enjoy. Over the years, we’ve found ways to include such trendy topics as wizards (pairing J.K. Rowlings’ Harry Potter with Jay Ungar’s Wizard’s Walk) and pirates (putting Jonny Duddle’s The Pirate Cruncher — with that evil fiddler puppet! — with Da Full-Rigged Ship.)

We always make sure to end with the audience able to stand up and dance with us, presenting Anna Marlis Burgard’s Flying Feet and the instantly-recognizable jig Irish Washerwoman. Afterwards, we welcome the children’s questions and let them come and try a note or two on the instruments.

Best of all, at the end of each program, we see the children crowd around the table full of books, eager to read the stories for themselves.