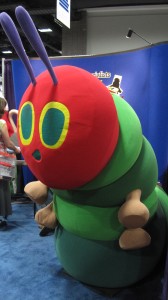 Could there possibly be  another profession whose members throw themselves into their jobs with as much zest and joy as librarians do?  Every ALA conference I attend convinces me that we are truly blessed among all professionals.

My first ALA was in San Francisco in 1987 — I was a new college graduate and had been accepted to what was then known as UCLA’s Graduate School of Library and Information Science.  My mom is a librarian and I literally grew up in libraries (was even brought to a few library school classes at Berkeley as an infant), but I had never encountered librarians en masse.

The tote bags!  The swag!  The sensible shoes!  The sheer enthusiasm of everyone I talked to!  I was hooked.

Countless ALAs later, I’m still hooked on the excitement of our annual conference.  Even after more than 20 years, there’s always something to learn and plenty of inspiration to be gleaned.  But I have learned that it’s not all about taking scads of earnest notes.  Nope, the bits of madcap craziness are just as important, not to mention the opportunity to play tourist in the host city.

Here are the highlights of this year’s ALA, from the sublime to the ridiculous:

Bugs and Bones!   Before stepping foot in the Washington Convention Center, I spent Friday morning in the National Museum of Natural History, holding a Madagascar hissing cockroach in one hand (it didn’t hiss or even scuttle) and an elegant and serene giant grasshopper in the other.  Next came an exhibit called Written in Bone, about what forensic science tells us about the brutal life of colonists in Virginia and Maryland.  Fascinating!  The dental issues alone are shudder-inducing.

Teens and 2.0!  As a brand-new YALSA member, I relished the opportunity to spend 4 hours with Dr. Eliza Dresang, John Green and David Leviathan, Dr. Kristin Purcell of the Pew Internet and American Life Project, and a whole host of awe-inspiring YA authors and librarians.  It was a just-right mixture of theory, research, and practice, and I’m more of a convert to 2.0 in libraries than ever.

Ice-cream!  Not that I’ve ever needed an excuse to eat ice-cream but the combination of hot weather and traveling seems to make it not just a privilege but a right.  And how delightful – both Georgetown and Dupont Circle supplied me with home-made ice-cream shops.  Bliss…

ECRR update!  Well, not exactly.  The New and Improved Every Child Ready to Read product won’t be officially unveiled until the ALSC Institute this September, and the presenters were a might cagey about giving any secrets away.  However, it sounds like it’s going to be great!  For all those for whom “phonological awareness” does not roll easily off the tongue, rejoice.  There will be much less jargon and much more emphasis on these 5 strategies for parents of young children – reading, talking, singing, playing, and writing.  And that’s not all!  All those elements we’ve wished for – more interactivity in the workshops, talking points rather than scripts, an emphasis on the physical environment in the library and in the home, sensitivity to the diversity of our patrons, and

Best view in DC!  And no waiting, no crowds, no fee.  Where?  The Old Post Office Tower.  Plus there’s a food court. 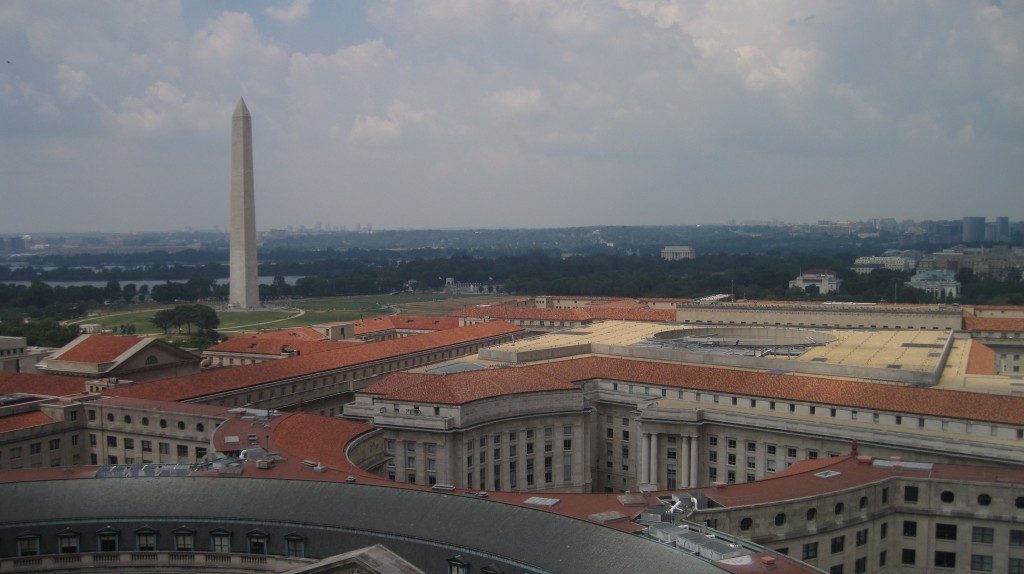 Fresh SRC!  If anything at all about my job gets me the tiniest bit jaded, it’s Summer Reading Club.  It comes around Every. Single. Year.  Luckily, programs like Extreme Makeover: Summer Reading exist to prod me into renewed enthusiasm.  Some ideas that got my SRC juices flowing are altruistic programs (San Diego County Library’s Read for a Reason, for example) and providing kits for groups like Boys and Girls Clubs so they can take part even if they can’t come to the library on their own.  Check the wiki for handouts and links.

Mo Willems!  Yep, he was everywhere, and thank goodness for that.  From his inspired performance as Elephant while reading/acting out his We Are in a Book! at Disney Hyperion’s lovely afternoon event at Acadiana (oh, the desserts…!) to his hilarious banter with Jon Scieszka at Demco’s Book Cart Drill Team extravaganza, Mr. Willems might be considered an Honorary Librarian for his madcap enthusiasm for books and libraries.

David Small!  He was all over as well, but his appearance with the editor of Stitches, Bob Weil (W.W. Norton), and NYPL children’s librarian and Fuse #8 blogger Elizabeth Bird, was a truly intimate and intense experience.  From revelations about the creation of and reaction to some of his earlier children’s books, to his relationship with his brother (to whom he once referred as a “Nixonian sepulchre”  – whew!) and monster of a mother, to how his terrible childhood helped create the artist he is today – it was a truly moving afternoon, sponsored by Baker & Taylor, Nrton, MacMillan, Penguin, Scholastic, and HarperCollins.

The Heat!  Oh, there were complaints a-plenty about the record-breaking heat, and I admit that I did not feel exactly daisy-fresh whenever I stepped out in it.  But it was such a lovely and exotic novelty compared to the cloud-enshrouded June Gloom of my habitual abode that I slogged about outside fairly happily.  And it did offer the perfect excuse for numerous ice-cream cones, and a few icy cocktails as well…

Sponge Babies!  Babies are indeed language sponges, especially between 6 and 12 months, as we learned from Dr. Patricia Kuhl, speaker for the Charlemae Rollins President’s Program.  Her presentation, focusing on her research with infants in several countries, was intensely fascinating.  Bottom line – how parents interact with their infants matters intensely, and can make a huge difference in how well they are able to learn at age 5 and possibly beyond.  I think all present came away from the program with a renewed commitment to reach out to parents of babies both in our libraries and out in the community.

The Mother Ship!  Well, rats – I staggered over to the Library of Congress on, of all days, Sunday.  Yep, it was closed.  But I sucked in sustenance from the Library of Libraries – and I even answered a reference question (“Can you tell us how to get to Pennsylvania Ave?”) right there on the sidewalk, having the appropriate reference tool (a map) tucked in my bag. 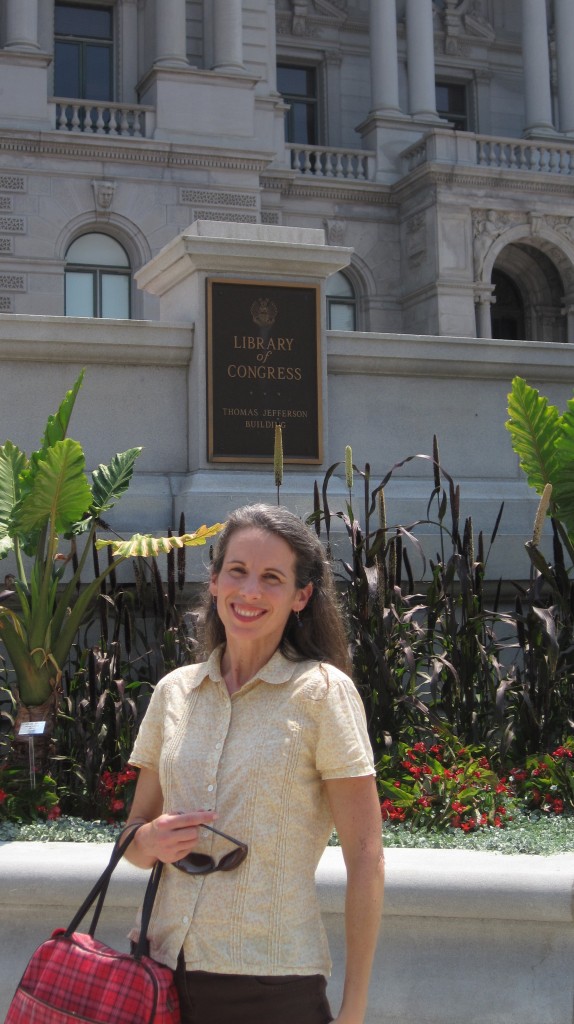 My People!  All around me, all weekend long, my fellow librarians chatted, laughed, stood in line for autographed books, shared ideas, commiserated about lay-offs and shortened hours, toted multiple bags stuffed with ARCs, pens, and buttons, and in general fizzed with enthusiasm.  I have much more experience now than I did at that 1987 conference in San Francisco, not to mention a head of rapidly silvering hair, but one thing hasn’t changed…

I just ADORE a fine ALA conference!