1. A super-dedicated and crafty staff person. (At least one. Not pictured.)

2. Laminated construction paper for game squares. (Tape them down. They will still be slippery, so make sure to ask kids to walk carefully to each square.) 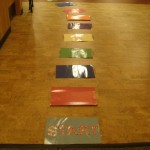 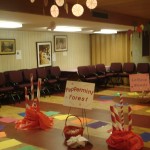 4. Giant lollipops. (Made with construction paper and dowel rods.) 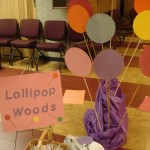 4. Giant gumdrops and snowflakes. (Gumdrops were made with papier mache, using a large butter tub as a mold.) 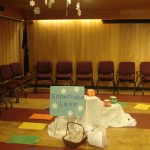 5. A candy castle. (Made from a donated appliance box and other odds and ends.) 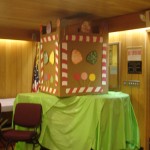 6. A display of books about candy. 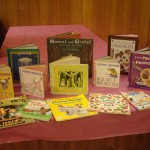 7. A team of dramatic teen volunteers to dress up as characters. (Not pictured.) Our volunteers also helped with the prep by making signs and other decorations.

8. Lots of kids looking for something to do on spring break! (Or summer break. Or any time, really.)

Yes, my library hosted Life-Sized Candy Land over spring break and it was a hit! We ran the game in the afternoon (to give us plenty of time to set up during the day) and opened it to all ages (most of the kids that attended were between 3-8 years old, though we did have at least one group of teens come through). As families showed up, kids started on the game board one at a time. I had a mic so I could be heard over the crowd and as I called out colors, everyone advanced forward.

From time to time I’d mix it up a little and say “Go to a square that’s the same color as a banana” or “Go to a square whose color rhymes with the word ‘moo'”. Nothing wrong with including a little literacy activity. We had a great group of teen volunteers and staff that dressed up as the characters from the game and handed out candy to the kids as they passed by their station.

It’s a lot of work to make the props, but then you’ll have them for the next time you want to roll out the game. We photocopied the nutritional information from all the candy we handed out, just in case we had any questions about ingredients (we didn’t). And, though we did include Gramma Nutt, there were no peanuts in the room (we used Circus Peanuts instead).

So, move yourself to a red square, take a gumdrop, and think about offering a life-sized board game at your library!

Has anyone else done a life-sized board game? What game did you do and what tips do you have for us? I did Life-Sized Clue for the teens at my last library.